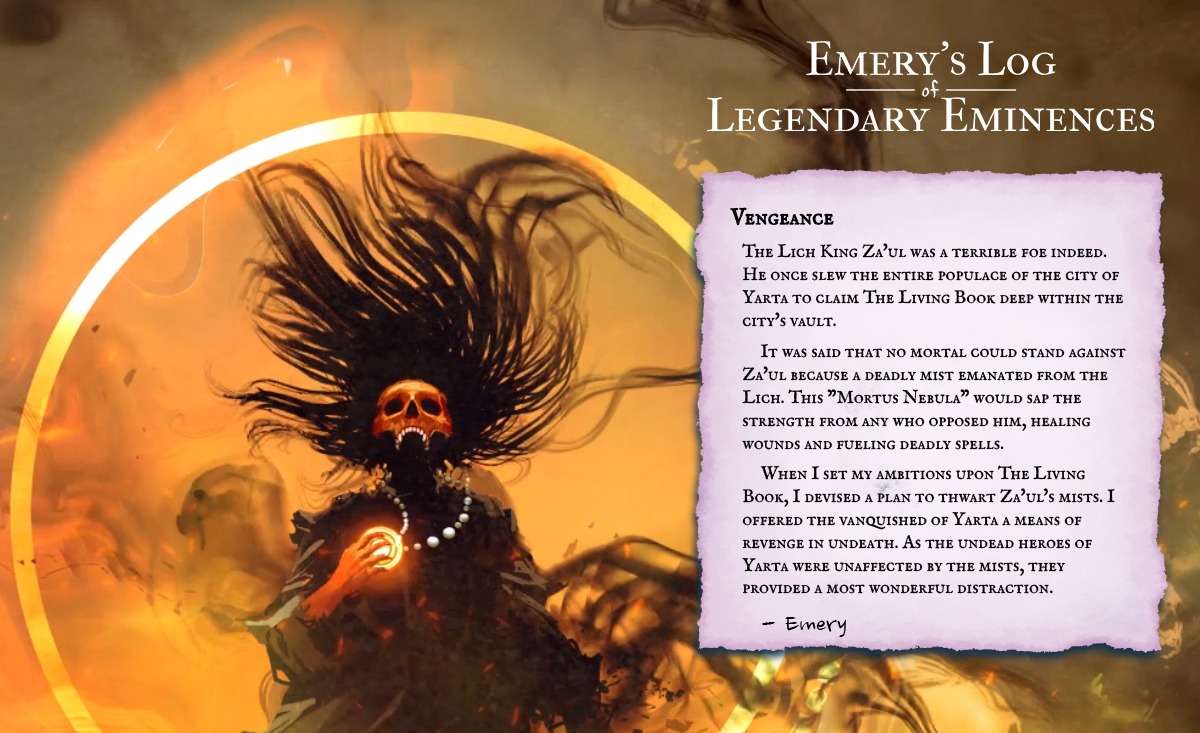 When the "Za'Ul Encounter" stretch goal was first funded in May 2022, I had envisioned a relatively straightforward encounter with a relatively typical lich. On the Kickstarter, I forecasted that the Za'Ul encounter would be ready to go by August. However, when I started brainstorming and writing about Za'Ul, the scope of project exploded quickly. Before I knew it, I had created a region with politics, world history, and factions for Za'Ul to pull the strings of. Za'Ul had become not just a Lich that is also a king, but a King of Liches.

This expanding vision was poorly timed with a resurgence of obligations in my personal life. I had many obligations to friends and family, compounded with starting a new job and a move to a new state.

However, I am happy to report that in this past month, my life has stabilized and I am now settling back into a familiar creative routine and the scope of the Za'Ul module has stopped expanding.

Rather than forecasting a new faraway date that the complete Za'Ul supplement will be ready, I plan to post regular blog posts with usable lore, and assets. The first of which went live a few minutes ago. My hope is that this approach will both deliver value to backers that are eager to run Za'Ul at their table. When all the content is ready, it will be compiled into a PDF of comparable quality to Emery's Log of Legendary Eminences.

The content will be split into two separate projects.

The first will focus mostly on an encounter with Za'Ul in his lair. The treasures that are present in his lair are deeply connected to the other Liches he has created, coerced, and bent to his machinations and as a result, detailed lore will be provided in the Za'Ul encounter for free to backers of Emery's Log of Legendary Eminences.

Then I will start a second project, much larger in scale, that fleshes out the region Za'Ul influences. It will probably feature stat blocks for the individuals Za'Ul has coerced into Lichdom over the centuries. My hope is that with this second more ambitious module in hand, a DM could run an entire campaign featuring Za'Ul as a recurring villain that culminates in an all-out confrontation for the fate of the known world.

I hope that backers feel that the encounter that they were promised feels richer and is more inspiring as a result of the time I spent fleshing out this new world and its competing forces.

I will not be posting a new update to the Kickstarter per each new blog post about Za'Ul. I take notifications very seriously and only want to use Kickstarter update functionality for major announcements. This means that if you want to know about new Za'Ul content whenever it is posted to our blog, that I recommend subscribing to our blog using the form below.

Thank you for your patience, and I hope that Za'Ul and his lair appear at your tables of Dungeons and Dragons.